Last week, Founder of The Scottish Gin Society, Stephen White, visited South-West Holland to discover more about the birthplace of gin.
Arriving in the historic city of Leiden, it quickly became apparent that gin has its place in history here but not necessarily in the modern-day gin revolution that we have all been experiencing in Scotland.

Starting its life, in the early 1600’s as Jenever (pronounced ‘hen-ever’), it was a distillation of malt wine with juniper and other botanicals added. If you’ve done any gin tours that include a brief history of gin, then you’ll know that King William of Orange pioneered the use of Jenever and gave it to his armies, and English allies – thus coining the phrase ‘Dutch Courage’. They drank this Jenever during the Eighty Years War whilst trying to repel the Spanish occupation of Holland.
Particularly successful at defending itself from the foreign oppressors was Leiden. The old city was protected by a moat and 7 gates – all of which are still there to see today. For its bravery and loyalty, King William of Orange provided Leiden with the gift of a University – now over 400 years old and the oldest in Holland.

A botanical garden was quickly established in 1593 by Leiden University – where the first tulip bulbs were grown (after being imported from Turkey).
Named Hortus – this botanical garden still flourishes today. The meaning of Hortus is an ‘enclosed garden’ but it is also attributed to a description of dried botanicals. So it’s no surprise that supermarket chain Lidl named its Own Brand Gin and its London Gin Bar as ‘Hortus’ referencing the history of gin and the botanicals which make it so special today. 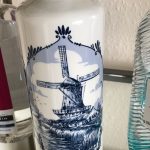 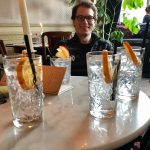 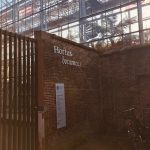 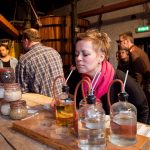 But gin doesn’t really seem such a big thing in Holland. The bars of Amsterdam and Leiden generally stock only a few gins with Hendrick’s being the standout runaway leader.
After that, maybe a few international brands like Bombay and Gordons and a couple of Dutch Gins if you are lucky. So it wasn’t that easy to drink a Dutch Gin in Holland!

Jenever was first produced in Schiedam (pronounced ‘Ski-Dam’) – just a few kilometres down the road from Leiden. The Jenever Museum is located here and you’ll find everything you need to know about ‘old jenever’ and ‘new jenever’ and much more. Whilst in Schiedam, Stephen and his group managed to find a bar which stocked two local gins – Bobby’s and Loopuyt – extremely tasty and very well served, making it even more puzzling as to why the gin explosion, taking place in the UK and other parts of the globe, does not appear to have caught the imagination in Holland.

In fact, Jenever seems as easy to come by as gin in the local bars. In Leiden, they found one bartender who was only too happy to volunteer ways to drink it. Of particular amusement was the KopStoot – or Head Butt. It seems that a combination of Lager and Jenever is the Dutch equivalent of a Jaeger Bomb!