The results are in! Our online survey of Scottish Gin lovers has revealed that Isle of Harris Gin is the nation’s favourite Scottish gin for the second year in a row.

In total, 6435 unique votes were cast in a survey that asked consumers to pick one of the many gins produced in Scotland as their favourite.

The voting public overwhelmingly selected Isle of Harris as the top Scottish gin with 21% of the votes. Self-described as ‘The Social Distillery’, Isle of Harris Gin is only available directly from the island distillery in order to support local jobs and the island economy. After receiving 1 in 5 of the votes cast, this unique distillery ethos has clearly captured the imagination of gin lovers across Scotland and built impressive customer loyalty for this award-winning brand.

“Everyone at the Isle of Harris Distillery is really excited to hear that our Isle of Harris gin has been voted the nation’s favourite in The Scottish Gin Society’s survey for the second year in a row. It is especially good news to know that our gin, despite being only three years old, continues to gain recognition on a national scale and our ethos has really captured the public’s imagination. We are so pleased and proud to know that gin lovers enjoy the flavour and unique story of our world-class gin as much as we do.”

Some of the smaller craft gin distilleries also enjoyed success in the poll, reflecting the loyal following of many smaller brands, and the diverse landscape of the Scottish Gin industry in general. For example, in 2019 the sustainably sourced Kintyre Botanical Gin takes second place, whilst Redcastle Gin lies in third position.

“We believe The Scottish Gin Society survey to be the largest of its kind and are delighted to have received twice as many responses in 2019. The results show that the popularity of Scottish gin is still growing, especially with all the new entrants appearing in this year’s survey. We would like to congratulate the brands involved as they are all producing exceptional products and look forward to the bright future of the gin industry in Scotland.”

The full top ten list of gins as voted for by the Scottish Gin-loving public are:

We also asked consumers what they prefer to drink with their gin. Unsurprisingly, nearly 50% of respondents voted for tonic as their favourite mixer, with a further 21% specifying a diet tonic and 13% selecting a flavoured tonic. With an impressive 65% share of the vote, the nation’s runaway favourite tonic brand is Fever Tree. 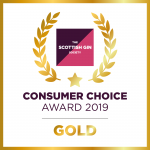 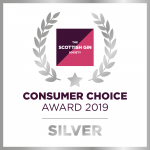 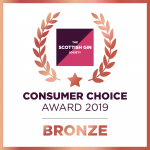 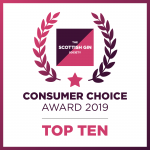