It’s the biggest and glitziest night of the year for Scottish Gin. Thursday 10th October, The Doubletree Hilton in Glasgow played host to the 2019 Scottish Gin Awards hosted by Des Clarke and Amy Irons.

The event brought together most of the key players in the booming Scottish Gin industry, from founders to distillers, marketers and press. A notoriously affable bunch, the Scottish Gin community often meet one another at the numerous festivals, shows and tastings that go on throughout the year, but The Scottish Gin Awards is a night for them to get together, have fun and celebrate the very best that the wonderful world of Scottish Gin has to offer. 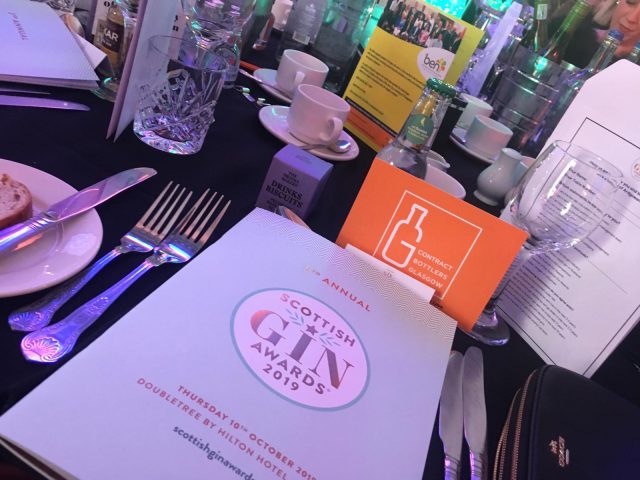 On the night of the third annual awards ceremony, there was an air of excitement and friendly competition as the nominees gathered for drinks before the ceremony. There was a long list of categories and a much longer list of finalists, whose entries had been through a rigorous judging process that involved 30 leading spirits experts from across the UK, who assessed 104 written entries and blind tasted 173 Scottish Gins (tough job). Of these, 117 gins were named finalists.

So down to the results. As usual there were a few surprises, but many of the big brand favourites also featured in the list of winners. And here they are:

Scottish Gin Event of the Year was a tough one to call, with so many amazing gin events happening in Scotland. In the end, Gintyre Festival of Scottish Gin was highly commended and The Big Big Gin Festival, run by The Corn Exchange, Edinburgh was named the overall winner.

Scottish Gin Destination of the Year had ten finalists, all offering a visitor experience at their distillery. The relatively new visitor centre at Orkney Distillery that overlooks Kirkwall Harbour took the prize.  The Distillery, that produces award-winning Kirkjuvagr Gin offers tours as well as a cafe and bar serving fresh local cuisine.

Best Brand Experience celebrated the out-of-the-ordinary events that gin brands put on to entertain the public. Arbikie’s A Club at the Merchant Hall was the winner, beating Eden Mill and Edinburgh Gin.

Excellence in Branding looked at the overall brand impressions of the finalists, and with so many amazing Scottish Gin brands on the market, this would have been a difficult round to judge. In the end the award went to Lind & Lime, from The Port of Leith Distillery and if you have ever seen their stunning packaging, you would understand why.

Exporter of the Year was awarded to Isle of Harris Distillers, who walked away with the coveted Distillery of the Year at last year’s event.

Innovation of the Year category had 8 finalists, but it was the all-female team behind Lussa Gin, distilled using hand-foraged botanicals on the Isle of Jura that took the medal.

Growth Business of the Year was awarded to the brand that the judges felt had the most impressive business growth over the last 12 months. Definitely a hotly contested category with big players like Edinburgh Gin and Isle of Harris in the running, but in the end family-run McQueen Gin took the prize with Shetland Reel being highly commended.

With so many new Scottish Gins coming on the market, Best Newcomer was another busy category and the award went to community-owned GlenWyvis Distillery, who produce GoodWill Gin.

In the taste categories, gold, silver and bronze medals were awarded for each, and here are the gold winners:

Then it was onto the two final (and biggest) awards of the evening.

Scottish Gin of The Year was awarded to Lenzie Gin, a small-batch gin that is distilled using cranberry and bilberry which grows locally in the hills around the small town of Lenzie located 6 miles northeast of Glasgow. Lenzie Gin was developed by the owners of Billington’s of Lenzie with contract distillers, Distillutions of Arbroath, and it also fought off competition from 44 other contenders to win the gold medal in the London Dry Gin of the Year.

Scottish Distillery of the Year is one of the most coveted awards of the evening and it was awarded to Dunnet Bay Distillers, who produce the range of Rock Rose Gins. They previously won Scottish Gin Destination of the Year and were understandably delighted with this award. You’ll find this Caithness distillery, where Rock Rose Gin is made in the most northerly county of mainland Scotland in Dunnet, overlooking the bay. Bespoke pot still ‘Elizabeth’, was uniquely designed to create the spirits by one of the oldest still makers in the world.

And so ended the third annual Scottish Gin Awards. Well, not quite. As you might expect there was plenty of celebrating happening into the wee small hours. A huge congratulations to all the finalists and especially to the winners.