It has been four years since the first Stirling Gin Festival popped up in the iconic Stirling Highland Hotel and no one could have foreseen how meteoric its rise has been.

The Scottish Gin Society were delighted to be present when, for its fifth year, the festival opened its doors to more than 30 gin companies – including new-comers Perth Gin and Granite North and old favourites like Arbikie and Boe. The festival attracted hordes of gin-lovers from all over Scotland and the rest of the UK and most years have seen some long-distance pilgrimages by the world’s most dedicated gin drinkers.

The Festival organisers confirmed that records were once again smashed with a staggering £70,000 worth of gin sold by the various brands attending, a 100% increase on last year, and it is estimated that the local economy benefited by more than £250,000. With the construction of Stirling Gin’s first distillery well underway, the company is hoping that tourism in the city will continue to grow and flourish.

SGF is organised and run by local company Stirling Spirit Co. and is a sister business of Stirling Gin. Co-owner and founder June McCann is astonished each year by the success of the festival but this year has been beyond her wildest dreams. June said, “I am absolutely delighted. Who would have thought our little gin festival would have grown to this?”

Stirling Gin Distillery’s manager, Lara Williams, has attended past festivals in a previous job and couldn’t be happier to be on the other side of the fence. “This company,” she said, “has been the best I have ever worked with and this festival really reflects the passion we have for what we’re doing.” 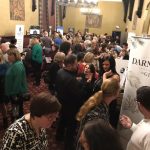 The gin brands giving out samples of their delicious products had a great deal to say about this year’s bumper event. Noru Innes commented, “Great event! Thank you for having Pixel Spirits and Devil’s Staircase at your outstanding festival, we had a blast”; Stuart MacMillan with Kinrara Distillery added, “Best festival in Scotland, enough said!”; while Thomas from Isle of Skye Distillery said, “We attend a lot of festivals and events and Stirling Gin Festival is the best we’ve ever been to.”

SGF is also proud to have captured the hearts of its long time attendees with the following collection of accolades:

Lorna Young: “Fantastic day yesterday June, I would say it’s the best yet.”

Maggie Rankin: “Brilliant day. As you know we go to lots of gin festivals, however Stirling Gin is be far the best. Well done all.”

June believes that the secret to SGF’s success lies in the creativity of the gin brands. Each year June makes sure that a variety of styles, stories and flavours are represented and that punters are always guaranteed to try something new and exciting. Whether it be Harris Gin’s sea kelp background, Dr. Osbourne’s layers of fennel and dill, the gentle notes of lemon balm and rose in Lussa Gin or Stirling Gin’s more unusual mint and bramble liqueur, there’s truly something for every palate.

Is it possible for the sixth Stirling Gin Festival to be any better than this year’s? It seems unlikely but June is looking forward already.

“It just keeps getting bigger and better. We are obviously delighted with the sales figures but what’s more important is to see how engaged and happy people are to be sharing in what really is a wonderful industry. Fingers crossed!”