That is the strap-line for the Kelso Gin Company, the first gin distillery in the Scottish Borders, opened in 2016, and boy do they live up to it!

Speaking to Oliver Drake – founding partner of the company – is a joy. An incredibly interesting man, full of fantastic, off-the-cuff stories, like the time he was a record executive at MCA after a stint at EMI and a well-known pop band stole his wallet. Or, the fact that Andrew – the distiller – once trained racehorses. Gin producers around Scotland, never cease to amaze us.

Kelso Gin was originally distilled in Kelso in the old Tempest Brewery. The distillery now has a new home in the most idyllic of surroundings at Harestanes, Ancrum. It is particularly stunning just now as the autumnal leaves are shining in all their copper, red and golden glory. 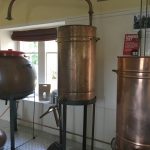 Two Portuguese copper stills sit stoutly in the distillery – both are 200l and called Penny and Tuppence. Penny is so named due to an old tax imposed in Kelso on drinks, that was used to fund the building of the Rennie bridge, and Tuppence because she is the second.

The team use only the finest organic Grain Neutral Spirit for their gins, which are distilled slowly over 24-36 hours to produce extremely smooth gin. The ingredients, many of which are a closely guarded secret, are foraged locally and used in the belly of the stills to produce their gins and liqueurs. As much as the stills are 200l, they only ever distil at a capacity of 40 litres in a run, taking the finest cut.

The original – The Crow Man’s Gin is a homage to the legend of The Crow Man: a travelling medicine man who toured the Borders offering the ailing, the weary and the lovelorn ‘little brighteners’ from his leather Gladstone bag. He wore a leather mask with a beak, like that of the plague doctors, which would have been filled with herbs to ward off ills. Tales were told of men who were restored and women who were soothed by his special mixes of herbs, spices and secret ingredients. 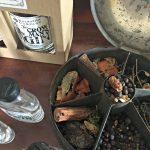 The Kelso Gin Company are not claiming that their gin will do the same, but nonetheless, it is an exceptionally smooth gin, with subtle notes of cinnamon, angelica and secret ingredients inspired by the Crow Man. Oliver, a self-confessed whisky man, wanted a gin that could be drunk neat, and they have achieved that.

Before visiting I had only ever tasted the Elephant Gin, which I was drawn to by the label, which has a real Indian feel to it. The labels are all designed by Oliver’s step-daughter, which are then printed in-house and painstakingly guillotined and applied in the bottling room upstairs. The upstairs room is where all the bottling, waxing and labelling happens, with almost 360-degree views of the surrounding countryside.

There are plans in place to open the distillery to the public in the new year.  We think it will make an excellent destination, so we’ll keep you up to date on its progress.

In the meantime, you can look forward to our special feature on their Lovage Gin, coming up next month, where you will have the chance to win a bottle for yourself, so keep an eye on all our social channels.

On the Nose: juniper led, with hints of cinnamon

On the Palate: juniper gives way to spice

On the Finish: smooth, the spice gives way to citrus notes, especially with the addition of a tonic.