We visited Fiona Walsh, co-owner of Redcastle Spirits a few weeks ago, and when we were there, there was a flurry of excitement when the postman appeared at the door. Alas, it wasn’t the brown HMRC envelope they’d been eagerly anticipated.

However, the disappointment has been short-lived and now we celebrate with the team as we can reveal that they have been given the all-important green light from HMRC to start distilling at their brand home in Carmyllie.

A distillery at the heart of the community

The distillery is now an integral part of the Redcastle Brewery, and we were taken to see the 380 litre pot still where it sits proudly opposite the fermentation tanks waiting patiently to start its work. There is ambition that, like their fellow Angus based producer Arbikie Highland Estate, Redcastle could become a field to bottle spirits producer, using barley grown on their own land.

But, let’s rewind, Redcastle has been on an incredible journey. The farm where the brewery, distillery and bottling plant is based, is named in honour of land that featured the namesake Redcastle and has been in John Anderson’s family for generations. They have since moved to Drummygar Mains, Carmyllie where the name lives on, along with the glorious Clydesdale horses that John breeds, who are an unmissable feature of this wonderful location.

Fiona has a wealth of knowledge and has worked in the spirits industry for 20 years or so (which is very hard to imagine given how youthful she looks!) John owns the brewery and was looking for some support, so Fiona came on board and the rest, as they say, is history.

They teamed launched Redcastle Gin in 2017, the recipe was developed by Fiona, who worked closely with Lewis Scothern, the master distiller of Distillutions, Arbroath. The gin is currently distilled there, and this collaboration will continue, with Lewis and his father working closely with the Redcastle team, lending support as full production moves to the new distillery at Carmyllie.

The range has grown in line with the gin’s popularity and now features seasonally inspired liqueurs and a spiced rum. In the recent Scottish Gin Society Consumer Choice Awards, Redcastle was awarded a bronze, which given the array of great Scottish gins out there, is a fantastic achievement.

Now they have the still in place, the team plan to host distillery tours in the summer of 2019. There is also a newly installed BBQ hut in the grounds – which has the capacity to be used for tastings and other events.

We wish Fiona, John and the team the best of luck with their new distillery. 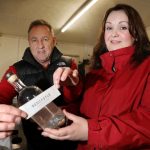 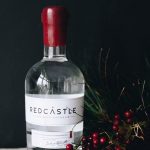 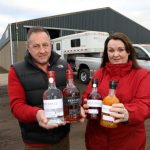 So, what does it taste like? Redcastle Gin is made using 13 botanicals, and the flavour profile was inspired by Uncle Jack, the last person to use the title of Baron of Redcastle, he was a real bon viveur with a true zest for life. Kafir lime leaf, star anise and pink peppercorns are balanced beautifully with the addition of citrus to reflect Uncle Jack’s personality.

Preferred serve – premium tonic, with a slice of lime (and pink peppercorns if you have any)

On the nose: juniper gives way to spice

On the palate: star anise leads the spice, and the warmth of the other spiced botanicals, is balanced with zesty citrus

On the finish: the addition of tonic really opens up the gin, making it an incredibly dry and refreshing gin.