If you’ve ever read any of my blogs, you may notice that I can often be prone to sheer excitement – but boy o boy, our visit to Arbikie was just incredible.

The first thing that strikes you when you arrive at the Arbikie Highland Estate is just how vast it is; and added to that is a rich farming tradition which the Stirling brothers, John, Iain and David are continuing – whilst diversifying. Or are they? Records show that there was once a distillery on the Estate, dated back to 1794.

Arbikie is the first gin producer in Scotland to be truly field to bottle – they make their own base spirit from their own grain or potatoes, which allows them to control the spirit making process from start to finish. The water used is sourced from their own underground lagoon, which we were standing on top of looking around at the array of homegrown ingredients that goes into the spirit. Where possible the botanicals are from the estate and around Angus.

What was once the dairy now houses the distillery with its state of the art stills. Each of the spirits is distilled differently but reflect the traditional Scotch whisky method. They are all distilled in the same copper pot stills – Jan and AK (named after their mother and father), and then continue their journey to the 40 plate distillation column, (the biggest I have seen in the flesh, so (to speak.) 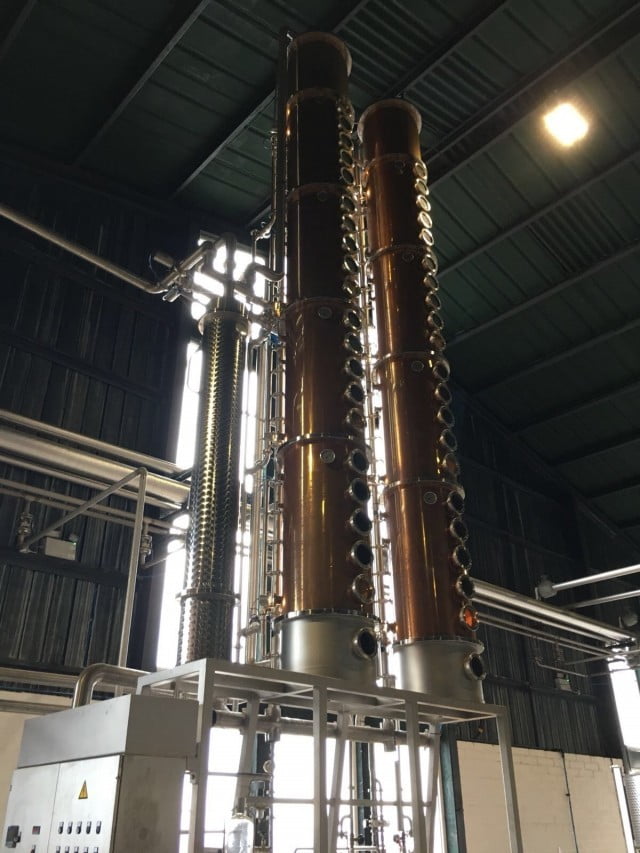 The distilling team is led by Master Distiller, Kirsty Black, who Kirsty’s Gin is named after. Kirsty joined Arbikie in 2014, so has been with the Stirling brothers from the very beginning. Following a successful career as a Quality Engineer, Kirsty embarked on a Masters Degree in Brewing and Distilling at Edinburgh’s Heriot-Watt. Jobs in brewing followed, but it was distilling that excited Kirsty, and the rest, as they say, is history.

One of the things that I truly love about Arbikie is that there is a circular process – from planting, sowing, harvesting, mashing and any waste is recycled, and put back into the land or feed for the animals. The respect for the land and environment is integral to everything they do.

So, what does the future look like for Arbikie? There are plans in place to expand and open a visitor centre, overlooking the stunning Lunan Bay. Given the diminishing juniper crops in Scotland, there has been quite an undertaking by Arbikie to plant juniper on the land, so they will in years to come use their home-grown juniper to make gin. Added to that, Arbikie is heading off around the world to be experienced by new markets. And in a few years, well around 2033, they will release their 18-year-old Highland Estate Single Malt Whisky. 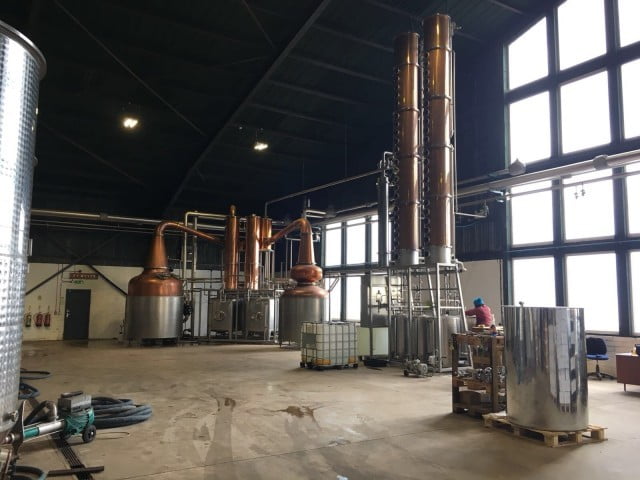 My takeaway from my visit and spending time with John Stirling is, that this is a true heritage brand, and the Arbikie legacy will be forever synonymous with the art of field to bottle distilling.

And to the gins:

Kirsty’s Gin is made using a potato base spirit and botanicals reflecting the landscape;

AKs is a wheat base spirit and uses honey from the Estate’s bees, so is sweeter and my favourite one especially paired with ginger ale (a top tip from Adam Hunter, Arbikie’s commercial manager).

Before I sign off, we were struck by a huge scarecrow sculpture outside the distillery. Tattie Bogle is the Scots for a scarecrow and was used to scare birds from disturbing and eating growing potato crops. Arbikie’s potato vodka is Tattie Bogle and their wheat vodka – Haar. Haar is Scots for cold sea fog on the East coast of Scotland that occasionally comes in from Lunan Bay and covers the distillery.