Orkney Distilling, the firm behind Kirkjuvagr Orkney Gin, has appointed a head of production for its new Kirkwall distillery, set to open later this year.

Louis Wright, originally from Kirkwall, is currently undergoing full training for his role with Strathearn Distillery, where some of the country’s finest craft spirits are produced.

Production of Kirkjuvagr, and its sister gin, Arkh-Angell, will move to Kirkwall once Orkney Distilling’s new distillery and visitor centre on the town’s harbour front is fully operational.

Louis, a former pupil of Kirkwall Grammar School, studied History at the University of Edinburgh, working as a tour guide at Highland Park Distillery during his summer holidays. Following his graduation he worked in Belgium for three months with the Commonwealth War Graves Commission. 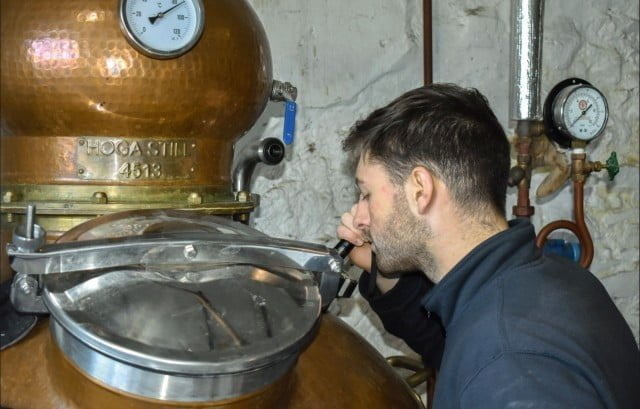 “It has long been my intention to build a career in the drinks trade, particularly after having worked at Highland Park as a tour guide during summers at home,” said Louis. “I was fascinated by how alcohol was produced, particularly gin and whisky, but also captivated by the stories that underpin each product, which are almost as important as the spirits themselves.

“When I came back from Belgium, initially for Christmas, Stephen and Aly Kemp from Orkney Distilling contacted me about the position on their team. Kirkjuvagr is a high quality and authentic product with a unique story and sense of place, so it was a great opportunity for me.”

Louis added: “My role at Orkney Distilling will primarily be as head of production, but it’ll also involve product and brand development, along with boosting public engagement through the medium of tours, tasting, exhibitions and trade shows. I can’t wait to get started!”

Stephen Kemp said: “Louis caught our eye early on in the hunt for suitable candidates for this important role within our new Kirkwall distillery. We knew he was an experienced and knowledgeable guide, with a strong academic background, but we were also aware of his great enthusiasm for the drinks trade, his appreciation of the distilling craft and his willingness to learn.”

Stephen added: “Louis is being well prepared for his new position by our experienced colleagues at Strathearn and will be responsible for ensuring a seamless, quality focused shift to production here in Kirkwall. It’s a key role in our operation and one we’re confident he’ll absolutely thrive in. Crucially, Louis is extremely passionate about our brand and understands the history we’ve drawn upon to create gins that are truly Orcadian in character.”

Stephen and Aly Kemp, and Louis Wright from Orkney Distilling, will be on hand to meet the public at the Orkney Gin Festival, taking place in Kirkwall this weekend.