The debate around what makes a Scottish Gin Scottish has been ongoing for a while and we, at The Scottish Gin Society are following it closely.

Recently there was a live debate at the Edinburgh Food Festival.  One of the panelists was James Sutherland, owner at 56 North and all-round Scottish Gin expert.  We spoke to him to get his thoughts on the debate. 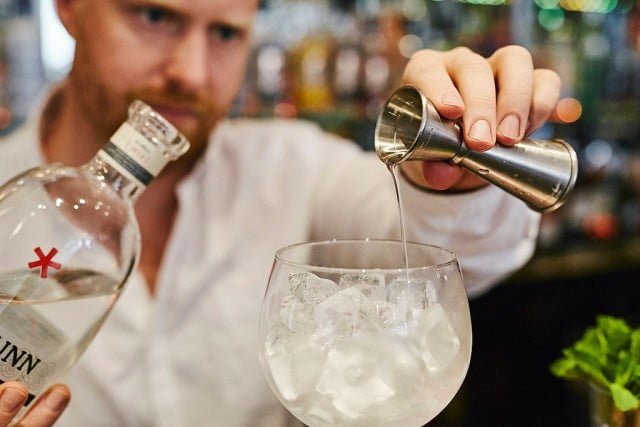 What’s your background with gin, James?

My first ever bar job was at 18 en route to university what seems like a lifetime ago now.  I was exceptionally lucky and fell into a job working with some incredibly skilled and passionate bartenders who loved Gin, Rum and Whisky and wanted to teach me everything.

My passion for gin has always been at the forefront of this and the more time I spent on bars learning drinks, cocktails and spirits the more I fell in love with gin as my go to for drinks.  This then led to me opening 56 North in 2008 (we’re 10 next year!) as a Gin, cocktail bar and restaurant.

I was doing the gin thing way before anyone was really that interested so it’s stood me in an exceptional position to be able to grow and develop with the current gin boom and I’ve worked with some exceptional people, brands and new companies in the last few years on all things gin so I guess I’m exceptionally privileged!

So, why start The Great Gin Debates?

For the simple reason I am a firm believer in great products but also some transparency about what we’re all drinking.  I knew Blair Bowman as a Whisky author and expert and we started discussing the idea of the true nature of Scottish Gins and how uncontrolled it is compared to Whisky.

I have long been intrigued by the idea that gin is often not made where people think, in the way people think and made from what people think.  The more Blair and I chatted the more we realised there was very little transparency, regulation or help for consumers on any of this.  I have to credit Blair with the debate idea as we wanted to put a panel together for Juniper Festival 2017 to see peoples interest in the subject.

We called it “What is Gin?” and the engagement from the brands and customers amazed both of us.  Everyone involved has strong views as to what defines a Scottish Gin but we all have different angles with it which is equally interesting.

What are your views on the provenance of gins?

It’s a highly evocative subject.  As a proud Scotsman I love “Brand Scotland” and understand the importance of it for food and drinks industries.  It’s key we shout from the rooftops about it and protect and serve it well as we are only the current custodians of spirits with 100s of years behind them.  This all then leads to the key question of what is a Scottish Gin?

I don’t want to get too geeky but the basics of gin is you take a base spirit – which is 9 times out of 10 Grain Neutral Spirit (GNS) and then add flavours to this including Juniper, cut it to at least 37.5% ABV and you have gin.  You can compound it which is just steeping the botanicals.  You can distil it with the botanicals.  You can do a combination of approaches and more.  Here is the complex bit though.  The GNS is very rarely made by the gin producer, they tend to buy this bit in as it’s just Ethanol / Alcohol.  The supply of this GNS may be from England, France, Italy or Scotland.  Equally many of the botanical used in gin don’t grow in Scotland.  I’m sure you are already seeing the issues we have in defining a Scottish Gin as which bit makes it Scottish?

I have long used this and I’m delighted so many people have adopted it as an outline.

1. Grain to Glass – These gins do everything themselves.  They will make their own base spirit and then redistill this with botanicals to make a truly “from scratch” Scottish made gin. This process is time consuming, expensive, energy intensive and also requires space and equipment.  In the case of Arbikie they grown their own ingredients which is even more unique, but there are other good examples like Lone Wolf who follow this approach of making from gain to glass.  This is rare and there are a handful of examples due to all the problems above.

2. Scottish Distilled – These are Scottish Gin distillers who will have a Scottish Gin still.  They will buy in the GNS as they can’t produce the base spirits in the distillery.  They then pick botanicals (Scottish or not) and redistill to make a true Scottish Gin distilled and made in Scotland.  They are Scotland based, Scottish employers and normally highly transparent.  The issue with this is that in theory there may be very little in the bottle grown in Scotland.

Critically though these ingredients are distilled in a Scottish still.  The vast majority of Scottish Gins do use some Scottish botanicals so it’s highly unlikely to never have anything Scottish in it.  Also as water is such a core component of the gin making process this will be Scottish too!  Good examples of this are Eden Mill, Pickering’s, Edinburgh Gin, Rock Rose etc.  As a rule this is what most of the Scottish Gins do and it’s traditional and in my eyes fully Scottish as it’s distilled into gin in Scotland.

3. Scottish Botanicals – The first of our grey areas.  These gins may have “Handpicked Scottish botanicals” but does this mean they are made in Scotland?  We could hand pick botanicals from an area and then send these off to a big contract distillery anywhere and ask them to use them to make gin.  The gin could then be called after the place the botanicals were picked and say “Handpicked Scottish Botanicals” but is it actually Scottish?

As a rule I’d say no, but critically a lot of the companies who take this approach are Scottish employers so we do have to value that side of things.  The issue for me here is transparency.  Some of the brands who do this are very up front about the botanicals and where the gin is actually distilled.  Some of the others are not keen to share any basic info but are keen to play on “Brand Scotland” this I have issues with as is it truly Scottish?

4. Scottish place name or branding but no links to Scotland – Major grey area.  There is literally nothing to stop anyone calling something after a place or a famous site and then branding the gin as Scottish.   In reality this gin may have zero links to Scotland other than the name or branding.  For fun lets imagine I want to launch “Braveheart Gin”.  It sounds Scottish, we could make the bottle look Scottish and 99% of consumers would assume it’s Scottish?  Issue is we could make it at a big contract distiller in England or anywhere.

As long as we don’t put where its actually made anywhere obviously then no-one’s going to know!  It’s mis-leading, is trading on brand Scotland and often uses clever wording to drive sales but isn’t really craft Scottish gin on any level.  This is the key category I personally have issue with.

All said and done I have to try to keep a fairly neutral stance with the above Categories but I feel it’s key customers are aware and can make up their own minds where they sit on the levels. 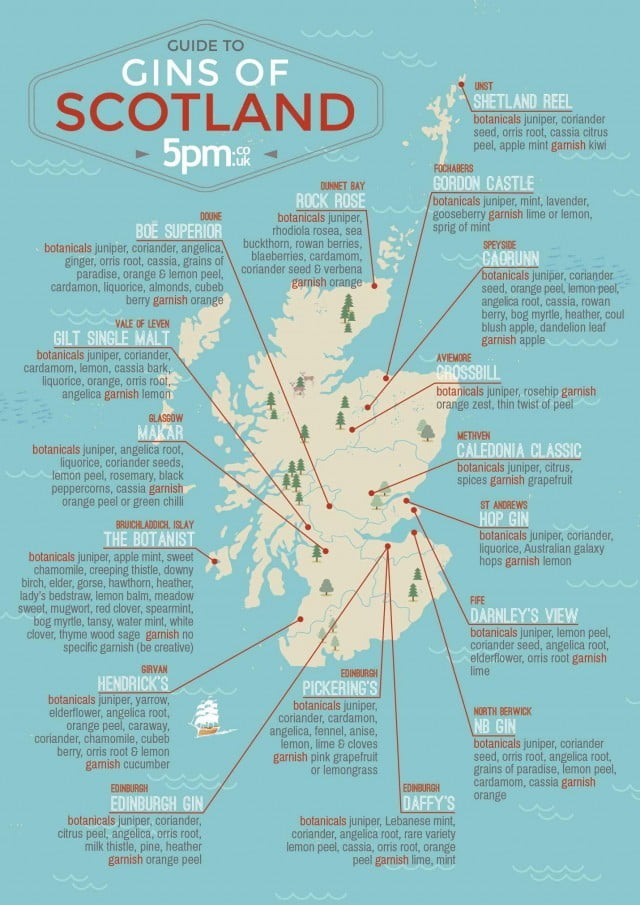 Where is the Scottish Gin debate heading?

It’s a great question.  From my side and I know Blair feels the same, they need to continue for the health of gin in Scotland.  Both myself and Blair are from different spirits background Blair being Whisky and me being gin, but this is why I appreciate his inputs so much.  Whisky is massively controlled, protected and regulated product which has stood it so well over time.  I don’t feel that the current Gin resurrection is yet at a point where we can legislate it too heavily without making mistakes.

I would hate to stifle invention or development of new ideas and products.  With the other hand I do understand why those brands who have invested heavily in Scottish distilleries want some protection.  At present I’m of the view legislation should come but we need to make sure it’s correctly pitched so we can develop Scottish gin without harming it.  My hope is that engagement expands and is not just a handful of us in the upper reaches Scottish gin trade, but more importantly our valued customers get input.  In the end, the customers are those we serve and this should not be forgotten and helping them should be what ultimately drives this.

In your opinion, what’s the future of Gin in Scotland?

This is easy, it’s very strong!  We are superb at making, branding, selling and have the world as our oyster.  I see no reason why we can’t aim high and make this our second spirit globally hand in hand with the Whisky industry.  I’d love it if Scottish Gin reached the stage where we see it on bars everywhere in the world and it’s already started but we have a long way to go on this.

Our thanks to James for taking the time to share his opinion on this topic.